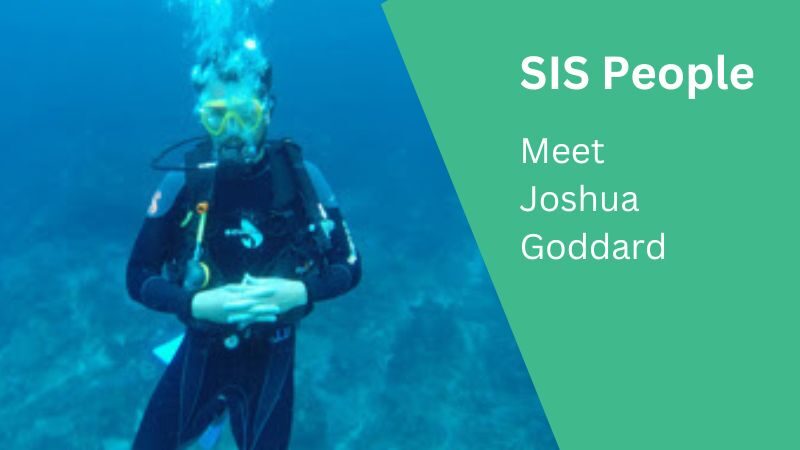 Joshua Goddard is an imposing physical presence. To look at him, you would be forgiven for assuming that this tall, broad man in his sports sweatshirt would be most at home in a rugby lineout, playing quarterback, or sending down an aggressive fast delivery to some unfortunate batsman.

But in fact, Joshua is a softly spoken individual, his voice flavoured by his years spent in his native New Zealand and in the UK. And it’s in this voice that he tells me that, though he always played sports, he was a late bloomer when it came to committing in a big way.

‘At school I played sports, but wasn’t involved in Physical Education until my final year of school. When I went to University I actually started off studying to be an accountant. But I found the economics lectures really boring so I looked to change.’

And that is when Sports Science entered his life. He could transfer to this subject which was not just about the physiological aspects of sport, but about the psychology, teamwork, adaptability, and all the other skills that go with it. That set him on the path that brought him to SIS at the start of 2022.

Other side of the world

For a New Zealander though, Stockholm is pretty much as other-side-of-the-world as you can get. So how does he end up here? ‘My mother was British, so that made me want to come to Europe. I moved to the UK in 2010 and spent some time there, including volunteering at the 2012 Olympics.’

After the Olympics Joshua moved to Stockholm where he worked at the Internationella Engelska Gymnasiet in Södermalm for 5 years. During his time there Joshua was invited by a colleague to join in a school field trip to Indonesia, though by happy circumstance, given his love of travel, he ended up being the primary organiser. ‘Field trips are pretty much a 24/7 commitment in terms of looking after the students, but that trip did allow me to squeeze in a course for my diving certification. Field trips are, of course, also tremendous learning opportunities for the students and the teachers. I went on to organise other trips including one to Madagascar which I will remember for the vast distances we travelled between locations in rickety buses not really built to accommodate people of my size!’

He returned to New Zealand for three years, during which time he married his Swedish wife. A return to Stockholm was however complicated by Brexit – he needed to move quickly to establish himself in Sweden as having a British mother no longer guaranteed freedom of movement. Joshua also discovered that, if he were to be allowed to remain, there would be the small matter of having a job to consider. Ever adaptable, he spent time teaching Home Economics at the Internationella Engelska Skolan in Skärholmen. Then just at the time he felt the need for a positive change in life, SIS published the advertisement for his current position and Joshua replied that very day!

Joshua arrives at SIS full of enthusiasm, and with his experience and love of travel has already had the go-ahead to organise a two-week field trip to Mexico under the auspices of Operation Wallacea. The project will give students the opportunity to take part in a real-world scientific exercise, and Joshua was quick to identify that he could apply to the SIS Spirit Fund to support that engagement. An application that was duly granted.

The trip will see Grade 10 and 11 students visit Mexico to research biodiversity and ecosystems in the Meso-American Biological Corridor. ‘The students get to be directly involved in meaningful research with scientists. They have an opportunity to engage in an experience that is uncommon for students of their age, allowing them a better understanding of what they might want to work with when they are older, or to simply give themselves an opportunity to feel like they are making a difference.’  The idea has obviously fired imaginations in SIS, as the trip was fully subscribed in just a few days.

His experience at the 2012 Olympics, where Joshua was part of one of the biggest logistical operations of the sporting world, will stand him in good stead. His role involved being part of the communications hub for the various teams around the North Greenwich Arena (as the O2 Arena was coyly known during the Games), so we’re sure organising a field trip will be a walk in the park for him.

In the meanwhile, Joshua will be enjoying his new teaching role at SIS and sharing his enthusiasm and energy as part of the PHE department. ‘I’ve found it really welcoming here’ he says, ‘And am looking forward to life as part of the SIS team’ – a good sporting analogy on which to end.