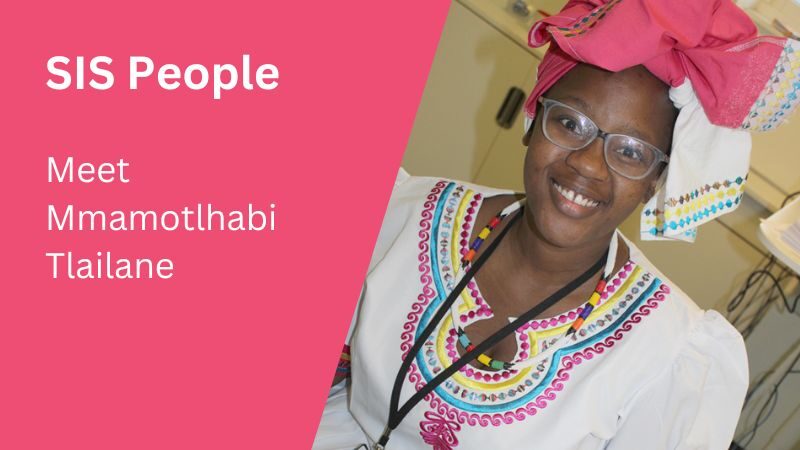 This is a story of love across continents. Partly.

In 2014 Mmamotlhabi was working in her native South Africa, a newly qualified teacher guiding her students through the social sciences and coaching field hockey on the side. Then she met a French national, newly arrived in the country, and only due to stay for a matter of weeks. They obviously covered a lot of ground in those few weeks, because the relationship continued on a long-distance basis until it became apparent to Mmamotlhabi that she had to cut the distance between them. She started looking for jobs in Europe.

An opening at the International English School lured her to Stockholm, teaching English – it might not be France but it was a lot closer than South Africa. As it happens though, her partner Neils – now her husband – was also open to change, and moved with her.

Of course Mmamotlhabi was no stranger to change. She was born in apartheid-era South Africa, and started in Grade 1 in the year Nelson Mandela took office as President. ‘We were fortunate’ she observes. ‘My father was a doctor, which opened more opportunities for us than for many black people in South Africa. But I still recall us moving into a suburban neighbourhood – perhaps only the second or third black family there – and having to carry papers to prove that we owned the house and were resident there.’

Her father went back to college to complete his qualification when Mmamotlhabi was born, and her mother was a teacher, so it is no surprise that she came to highly value education. ‘Though my mother tried to persuade me not to be a teacher’ she laughs. Another important influencer on her was her great aunt who travelled a lot. ‘And lived a colourful life’ she adds enigmatically.

Mmamotlhabi joined SIS in 2018 teaching Grade 4 having discovered that she loved the international school environment. At SIS she has been a driver in introducing the Makerspace concept, and integrating technology into the classroom. ‘For me, it’s important in education to inform students so they don’t repeat the mistakes of the past, and encourage them to use technology to find solutions and make things better.’ And she finds that a little easier to do in Stockholm rather than in South Africa where she says teaching is somewhat more ‘traditional’.

And is she enjoying life at SIS? ‘Oh yes. It would be good to get back more of our sense of community. I think that suffered a little during the pandemic. I love it when we all greet each other happily in the morning, and work together.’

If you pass Mmamotlhabi in one of her eye-catching, colourful, and cheerful African fabric patterns, I’m sure you’ll find it hard not to smile, and I’m sure you’ll get a warm greeting in return!