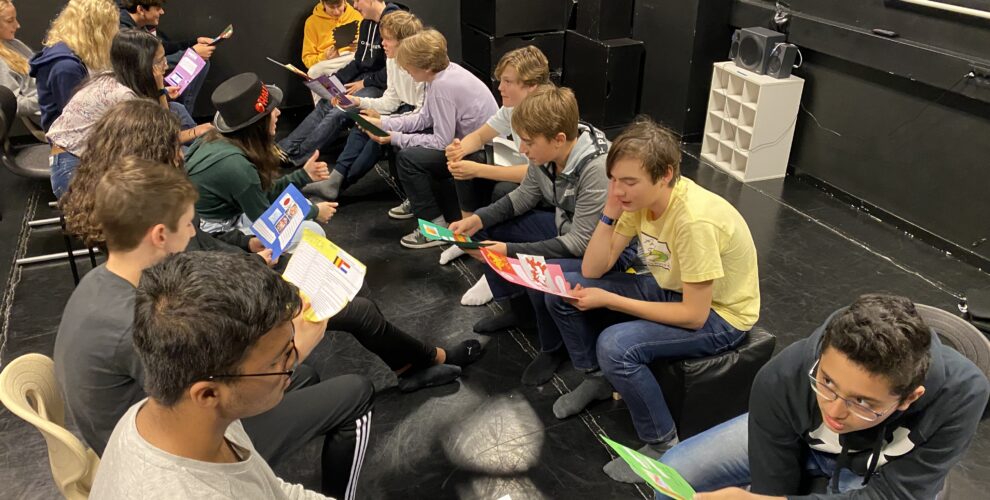 The whole world is a stage – Drama at SIS

As parents and educators, we have a range of expectations from schooling. Some more obvious, some less. Amongst other things, we expect students to learn, store and reproduce knowledge to help them pass exams. We expect them to build on their accumulated knowledge year after year. We expect them to develop critical thinking skills, and we expect them to enter higher education, where the whole process continues until they leave to take on the world.

Then, we have the less obvious, yet equally important, “soft skill” expectations, where we expect our students to build character and develop socialisation skills, to listen to one another, to negotiate and to compromise, to accept and work on their own strengths and weaknesses. We expect our school, SIS, to produce smart, well-educated well-rounded students ready to take on the world.

But how do we achieve the soft skills in a world readily focused on the hard skill set? How do we make sure the soft skills are carefully nurtured so that our students can go on and flourish healthily in an uncertain and competitive environment?

We are incredibly fortunate at SIS because our students have access to a subject that helps with all of these expectations and more. The Dispatch spoke to SIS Drama teacher, Anneli Thompson, about the hidden benefits of drama, a subject that manages to build both hard and soft skills which then spill over onto other subjects.

The Dispatch (TD): Drama is often seen as a fun subject, but is it more than that? What are the other benefits of Drama, than just having fun?

Anneli Thompson (AT): There is so much to be said, firstly, the skill set that drama offers benefits other subjects. In drama we create story boards and narratives that help students to think in an organised manner.

And of course, being on stage helps with giving presentations and feeling comfortable performing in front of other people. It helps them with confidence and to develop communicative skills which can be something some students struggle with.

But I think what might be called a hidden benefit is that drama enlivens the imagination, it requires students to think empathetically and see the world through their character’s eyes, and to envisage scenarios entirely from their imagination. This is immensely important when thinking creatively across other subjects too. But it’s also important for its own sake, it’s important because in so many places in life the imagination is being written out of requirements.

TD: That’s an interesting mix of instrumental benefits, where drama supports academic growth, and benefits where drama is just worth doing for its own sake…

AT: Exactly, that’s how it is.

TD: How about with basics like language. We are an English-speaking school so how does drama affect language acquisition and language production?

AT: Well, it really encourages all students to use their language without fear. When you’re playing a character or following a script written by a group, you are on much safer ground, you don’t worry so much about being judged. And, for some reason it can be easier to speak when pretending to be someone else. I have one student who said recently “it’s so hard to find the words in English, but when I’m acting no-one is judging me on my grammar and usage, I feel freer.” Plus of course, drama helps with accents and pronunciation which again, builds confidence.

TD: Is Drama a compulsory subject?

AT: In Grades 6 and 7, all students have to take drama at some point. Which helps to filter in students that might never have chosen it as a subject. There are students who are scared of being in the limelight or addressing their confidence issues, but later these are often the ones who are really thankful for having addressed those issues.

TD: Do they do public performances?

AT: In one sense everything is public in drama, but we also do 3 more formal productions a year, there’s the Nobel Event with the living waxworks, there’s the Art’s Showcase and then there’s the Grade 10 Spring Play, which is really popular and has a great reputation, we have 23 in the class and a waiting list.

TD: Is it difficult to grade Drama, being that it can be such a subjective thing?

AT: Not as difficult as you might think, we have classwork of course, so I grade them on how they work in their groups and the contributions they make. I grade them on their performances. They keep a journal, just like a science experiment, where they keep a record of what worked and what didn’t and reflections on the whole process which is a graded academic essay. But some of the personal growth does not translate to grades as easily but are I think, just as important.

TD: Do you think that the arts and drama are underrated in general?

AT: I think that everybody is different and there are so many students that need a creative outlet. It’s important to approach life from all angles and the arts allow for that. Students are forced to see themselves in a unique way, for example, if they find it hard to work with others, and drama and the arts help to teach them to communicate, to listen and to compromise. They have to learn to work with each other. I think the arts are undervalued in general in our society at the moment which is a shame.

TD: Thank you for taking the time to speak to the Dispatch

AT: It’s a pleasure.

There are all kinds of careers that can be followed in the Arts, but there are also enormous benefits to learning and interacting in a unique and engaging manner. Drama can provide the basis for developing the soft skills needed to flourish out in the world. Turns out that the Bard was right, the whole world is a stage and drama can put you safely up there on it!

English as an Additional Language: an individual journey
Comments are closed.