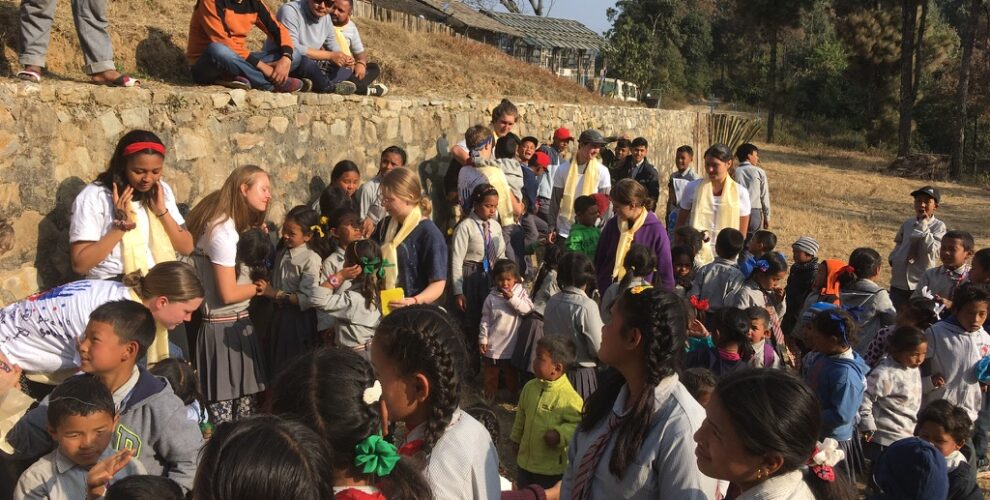 Bags for life: the SIS Nepal Project in 2021

MYP Science and English teacher Brad’s office is brimming with bags. On every shelf and in every corner, there are carriers stuffed with tracksuit bottoms, hoodies, hats, and gloves.

Brad is the SIS Nepal Project Co-ordinator, and the bags are the result of the latest enthusiastic donation drive led by our students. Later in the year, they’ll be flown to Kathmandu, then driven to a small school in a remote valley two hours from the capital and distributed to the local schoolchildren.

“We’re providing the warm clothes they need for the conditions they have,” says Brad, gesturing around his office. “The response from the SIS community has been awesome.”

SIS has supported the Shila Devi primary school in Nepal’s Nagarkot valley since 2014. After being inspired at a conference, Valerie Evers and Maggie Dankiewicz (a.k.a. ‘Malerie’) planted the seed that grew into the largest whole-school endeavour in SIS history. “The school was so generous with ideas like that initial Nepal trip. They accepted it and helped us make it happen,” Valerie recalls.

Through the Nepalese social enterprise Himalayan Voluntourism, SIS donates to Shila Devi every year. Originally this money simply provided a hot lunch for children who would otherwise go without, Brad explains. “Many families in that valley are low-income, subsistence farmers who didn’t send their children to the school because they wouldn’t get anything to eat at lunchtime. The idea was that if the school could offer a hot lunch, it would encourage more children to attend and get the education they so badly needed.”

Fewer than 40 children had enrolled at Shila Devi eight years ago – now around 160 attend regularly. In that time SIS’s standing donation has evolved too: helping the school develop by building classrooms, providing learning resources, and supporting teachers’ salaries.

A lasting bond and life-changing experiences

The SIS Nepal Project isn’t about offering charity from afar; instead, it aims to create a lasting bond between the two schools. Every year until the pandemic hit, SIS took a small group of students to Nepal to experience a culture and way of life completely different from their own.

“We take our students to Shila Devi to make it real, so they know what we are doing this for and who we’re helping,” Brad says. The group spends four days at the school, where they’re expected to plan and deliver lessons, and really get to know the children.

“Our students start out being very tentative, not wanting to even walk into the classroom on their own. Then by the fourth day, they’re crying when they leave the school because they’re so moved by the connections they’ve made, and it’s these students who drive so much of the following year’s fundraising.”

Because the Nepal Project is a charitable endeavor, it isn’t supported out of our school budget. Instead, a grant from the SIS Spirit Fund makes up a portion of our annual contribution, which is then supplemented by fundraising appeals organised by staff and students. Often these would take the form of a #Fit4Nepal sponsored run / walk around our campuses, but as Covid-19 restricted group activities in Sweden this year, students, parents, and staff took to two wheels for a virtual cycling challenge, which raised an impressive 30 000 SEK.

When the pandemic hit, the Shila Devi school had to close for five months. Although it’s up and running again, news from the valley is that life is more challenging for this remote community than at any time since the devastating earthquake in 2015 and that they need our community’s support more than ever.

Look out for an update from Shila Devi in the next few months, and in the meantime, thank you for supporting the Nepal Project through the SIS Spirit Fund and your own fundraising efforts. The generosity of our SIS community means that the connection between our two schools will endure.