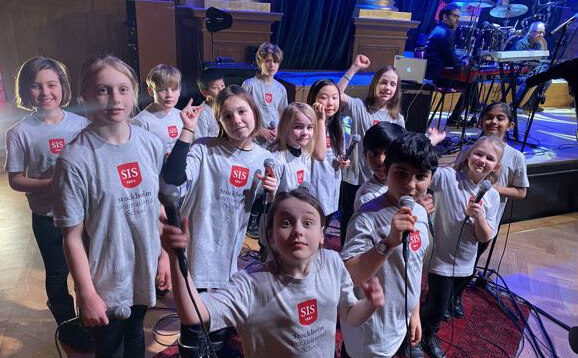 I have a dream, a song to sing
To help me cope with anything
If you see the wonder, of a fairy tale
You can take the future, even if you fail

In 1979, a small choir from SIS (called ISS back then) became the only singers to ever collaborate with ABBA by singing on the track “I Have a Dream”.

In 2021, our current Junior Choir followed in their footsteps and re-recorded that song for a film about the famous Swedish band for a Dutch documentary. Hosted by Nick & Simon, a famous singer-songwriter duo, and Kees, a Dutch TV host, and produced by Fast Forward Amsterdam, being a part of this documentary was an experience our Junior Choir will never forget.

On the big day, the students could barely contain themselves while Anneli Thompson, SIS Drama Teacher, explained what would happen once the TV crew arrived. Even with the pep talk, there was a huge swell of excitment when a crew of eight – producers, cameramen, sound engineers, as well as the famous hosts – walked into the music room. They were all very tall and imposing and filled the room with their presence but within minutes, it felt like a family reunion. Nick and Simon, were quick to charm the students with their smiles and friendly manner as they led them in a rendition of the song.

If the students were not immediately won over, the team’s praise of the choir’s first run-through certainly did the trick. The choir stood tall and sang their hearts out and made Kimberley and Anneli very proud.

The production team managed to track down two original members of the 1979 SIS choir who had sung together on the ABBA album. The ladies had not seen each other for over forty years, so it was a tearful and joyful reunion and they joined right in with the singing.

As the students were so well-rehearsed, the crew only needed a few takes before they went on to interview the students about themselves and their opinion on all things ABBA. It was a very entertaining couple of hours!

The following Wednesday, Kimberley and Anneli gathered the students once more in the music room. Everyone took a rapid Covid-19 test, administered by a nurse, before commencing the day’s exciting adventure. The children were extremely brave and, luckily, all were negative.

The walk to Nalen caused a few heads to turn as Kees led the choir in song up the road to the venue – cameras and microphones all around.

Entering Nalen, the stage lights shone with bright beams of color that reflected off the historical arches and pillars and revealed the original band members who had toured with ABBA all those years ago. Choir member Svea gasped in total awe and whispered, “This is like heaven!”

Nick and Simon greeted the choir with their usual warmth and gave high fives all around before it was time to begin. The acoustics were phenomenal as the voices of the artists, the choir, and the musical brilliance of the musicians blended into a perfect rendition of ABBA’s, ‘I Have a Dream’.

This was truly a dream come true for the opportunity to perform in a venue such as Nalen, where many world-famous artists have graced the stage. A dream to perform alongside artists like Nick, Simon, and Kees, Holland’s most famous trio of entertainers. A dream to sing alongside a band that has performed in venues across the world for the past 40 years or so. A dream to perform to the millions that will watch the documentary in the Netherlands, come May. A dream to be a part of something so special, a moment that won’t ever be forgotten by any one of us involved.

A special thank you to Kimberley – for her willingness to take on the task of organizing this great event at SIS in the midst of a pandemic. Her ability to gather and direct the Junior Choir safely despite the instability of the present situation and her dedication to organizing and preparing everything is admirable. And thank you to Anneli for supporting the project and reporting on it for the Dispatch.

This incredible experience will never be forgotten.