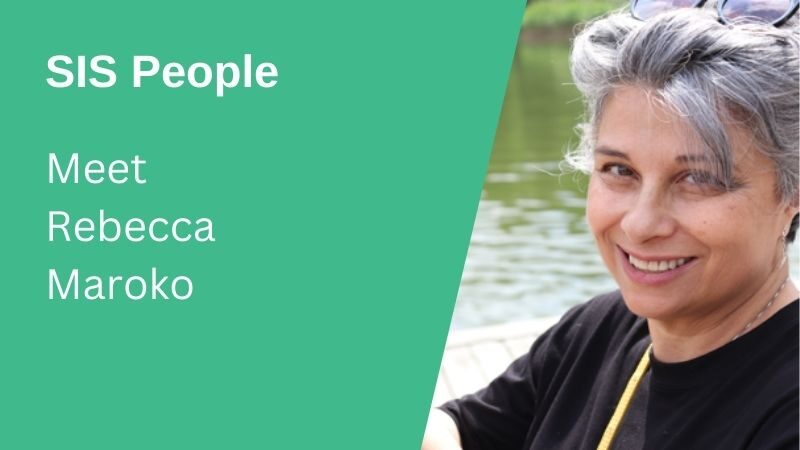 Third Culture Kids is a term first coined in the late 1950s. It refers to the children of families working abroad, and their development growing up in an environment where their attachment is to their peers rather than the culture of their home or host country.  Some of those Third Culture Kids are now Third Culture Adults. One of them, it might be said, is Rebecca Maroko.

‘Some people didn’t seem to realise there was such a thing as an Indian Jew. Even within the Jewish community there was a guarded response, because I didn’t “look” Jewish.’ So, in this environment where Rebecca felt somewhat detached from the identities around her, she pieced together her own from the “smorgåsboard” she had been served with.

This included an Israeli part too, as the majority of her maternal family had moved there and frequent trips from a young age as well as a proposed gap year after high school led to her living in Israel for the next few years, working as a travel agent. ‘Israel was my “safe place”, where I felt comfortable and enjoyed life in Tel Aviv.’ It was here that she met her first husband, and as we so often hear with teachers at international schools, that became the catalyst for her eventual move to Stockholm.

‘London, Tel Aviv, Stockholm – they are big, significant cities in their respective countries, but as I have moved between them, I like to describe my outlook as ‘glocal’, finding the local detail within these global cities and immersing myself in the culture.’ Today, Rebecca is so immersed in the Stockholm cityscape that she runs an Enrichment group for Touring Stockholm together with our Swedish teacher, Gabriella Lagerqvist (a throwback to her days as a travel agent perhaps) teaching the history and culture of the city.

Her arrival in Stockholm brought about her first acquaintance with teaching, and here her Hebrew skills became an essential part of the picture. She started working at the Jewish community in an afterschool centre teaching Hebrew and it was there that she discovered her love of teaching.

Not one to do things by halves, Rebecca had already committed to learning Swedish, and when she decided to pursue her teaching career she set out to achieve full certification as a teacher able to teach within the Swedish system, in Swedish, as well as an international school. Eventually managing the Jewish middle year classes at Vasa Real, a unique state school in Stockholm that offered Hebrew and Jewish Studies in addition to the Swedish school curriculum.

Then came a life-changing moment when health issues demanded that she slowed down, but after a couple of months at home she knew she wanted to get back into the classroom, but at a gentler pace, at least to begin with.

The move to SIS

In 2016 she spotted that SIS was recruiting for a position teaching English as an additional language. It seemed like the ideal position to gently move back into the classroom, doing a few hours a week. But as before, the demand grew. Since being appointed to that role Rebecca has once again developed her career, teaching English Language and Literature  and Individuals and Societies in the Middle Years Programme, and is also Grade Level leader for year 9. Her enjoyment of the teaching process and student wellbeing is undiminished:

‘I love helping the students make connections across literature, history, religion – all the cultural influences that enrich us. I love that about the IB (International Baccalaureate) and the way we teach it at SIS. It’s a privilege to coach our students in how to learn. That’s what truly prepares them for life, and makes them ready to do the jobs that don’t even exist yet. It’s fun being part of the future!’

And the future at SIS? ‘I’m so looking forward to moving into Norra Latin. It will be so nice to be in a space with so much to offer – more communal areas, a rich history, and the opportunity to create a school environment that really adds to our sense of community. It really completes the picture for me.’

It’s clear as she speaks how much Rebecca is enthused by the international, cross-cultural mix of personalities and voices at SIS, and the global values it embodies. As she puts it simply: ‘I feel SIS is a place I belong.’

When in Rome…
Comments are closed.