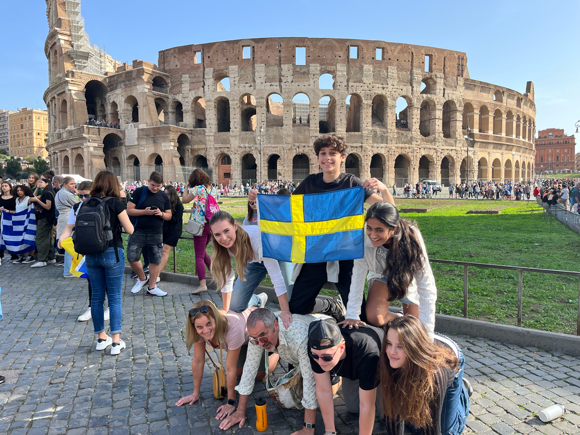 SIS students recently took part in an Erasmus+ mobility in Rome. Joint organiser Anneli Thompson shares her enthusiasm for these trips and writes us a little love letter to Rome…

It was an early wake-up call yet again as Erasmus+ Team Sweden gathered at the airport in the wee hours of the morning of Saturday, October 22. Conversations were few as we awaited the delayed flight to Rome. Sleep came to most of the team during the flight as we left the overcast skies of Stockholm for the sunshine of Rome. The Roman host families were all smiles as they welcomed their ‘adopted’ son or daughter into their homes for the week. Through the smiles, the nervousness was apparent in the eyes of Antonio, Eddie, Neva, Kaia and Geet. However, the pictures and messages that appeared over the next few days were proof that this opportunity through Erasmus+ to live and experience the home of a local family is what makes this project well worth the effort.

Two years and seven months previously, Team Sweden had experienced an unbelievable week of experiences and sights in Rome thanks to the dedication of the Erasmus+ coordinators of Team Italy. Cases of Covid-19 in the north of the country were mentioned but barely noticeable. Four days after we returned to Sweden, Italy closed down…and soon the world would follow and we would experience the first pandemic of our lives to this point. Fast forward to October 2022, the posters to keep your distance are visible, masks are still worn by tourists and locals alike here and there, but life is in full swing in Rome. Almost too full!

We were welcomed at the gates of Comprehensive Institute Largo San Pio V, where the Erasmus+ Italy team had coloured our flags on the tarmac. The teams were welcomed warmly by Mrs Simona Strabbioli, the Erasmus+ coordinator of Team Italy. Dancing and singing by the school students were a warm up before the maestro, Maurizio, led them in an operatic version of ‘Va’ pensiero’ by Giuseppe Verdi which was such a great welcome to this city that has so much to offer when it comes to history and culture.

The day continued with yoga in the park, in the midst of a bustling city and sirens in the distance, before we ended the first day on campus with the teams presenting their presentations and films on seasonal foods in our countries and our students cooking and baking using seasonal ingredients. This was in relation to our focus on SDG 3, Good health and wellbeing, which has been the focus on our Erasmus+ lessons and project work this term. As Team Sweden, we shared the Swedish love for all things seasonal, particularly berries in the summer and mushrooms in the autumn, ending with three topics you don’t ask Swedes about. 1. Their salary, 2. Political party they vote for, 3. Where they pick their mushrooms.

We were told to wear comfortable shoes for Tuesday, for good reason. We set off from the school gates and bypassed mopeds, Fiats and trucks to a trail leading to one of the largest parks in Rome, Villa Doria Pamphili, with pine and cypress trees and ancient villas of course. We walked out of the ancient gates and down the hill to see the view of the rooftops of Rome in front of the Fontana dell’Acqua Paola, before descending down to the Chiesa di San Pietro in Montorio, the church dedicated to the martyrdom of San Pedro which now houses the Spanish Academy. The stairs led us to the beautiful old quarters of Trastevere, with its winding streets and terracotta coloured buildings. After a quick lunch, we walked on to the famous Trevi fountain, where the crowds made it almost impossible to see the fountains. Our 16km guided walk ended at the Spanish Steps where we were naturally whistled at by the police when we sat down to take team photos. Worth it though!

No visit to Italy is complete without an excursion to the beautiful countryside, particularly if it’s along the rolling hills of Tuscia. Going along with our SDG 3, we would spend the afternoon learning to cook delicacies of Italian cuisine, led by the wife and husband duo’s who ran the organic farm we were visiting for the day. After being informed about the farm’s ways of becoming more sustainable, the students were split into mixed teams and the sounds of mixers, shouts of glee as they rolled out fresh pasta, dipped lady fingers in cold coffee and cut fresh ‘cilantro’. This was the best form of team-building and watching the students work together, overcoming the language barriers and thus serving a four course meal of fettuccine, tiramisù, baked potatoes and vegetable tarts under the watchful eyes of not just the chefs but of Mrs. Strabbioli, which was enjoyed under the ‘Tuscan sun’. Once the sun set over the hilltops, we filled the buses once again and the quiet buses on the journey to Tuscany became the party buses on the journey back as students had broken the barrier and become friends and there was no turning back.

A walk through history

Time for exploring the grand Colosseum, with local guides who walked us through this historical amphitheatre, with all its history that we know well through history books and films. As expected, the guides corrected theories portrayed in films and it’s always difficult to imagine that people chose to watch the horrors of the games for entertainment. We stopped for an Erasmus+ group photo outside the colosseum, where Team Sweden went on their knees to form a human pyramid which is now our tradition when in Rome, much to the chagrin of the team members at first glance but, being the good team sports that they are, the pyramid eventually took shape.

We then walked the cobblestone streets of the Roman Forum, yet again, a place of so many historical tales, philosophies, death and life. The buildings, the statues, the arches have so many stories to tell, if they could only speak.

Our final day in Rome was spent in the best way possible. We caught the train and bus to the outskirts of Rome where we hopped on bikes rented from Eco Bikes Roma. We cycled on the famous Appian Way, one of the oldest roads that ‘led to Rome’. We walked the fields which houses the structures of the Circus Maxentius, which used to be the racecourse for the horse-drawn carriages we see in films like Ben Hur. Our local guide guessed the student’s simply wanted to enjoy the afternoon on the bikes along the Appian Way so off we went and cycled when possible and walked when the stones were simply too uneven to cycle without getting the wheels stuck. The scenery of the countryside, villas and cypress trees were breathtaking. We closed our chapter in Rome with a visit to the San Callisto Catacombs, to visit the underground tombs of the early Christians, yet another amazing though sombering site.

No Erasmus+ mobility is complete without an evening to reflect on our week together as well as celebrate all our hard work and achievements. Teachers had cooked and prepared Italian treats to replenish the teams before the dancing began thanks to the compilation of songs by DJ Eddie, aka Eddie Pickett, starting with dancing to the Greek Sirtaki, better known as the dancing Zorba which warmed us up before popular group dances led by the Dutch team and on it went. The students and staff alike danced the night away with so much laughter and joy after an eventful week. We could not be more grateful for Mrs Simona Strabbioli, Mr Stefano Bartori, Mrs Irene Rinaldi, Ms Maria Maiuri and Mrs. Paula Martinelli. For their organisation, dedication, enthusiasm and hospitality.

Rome, you are forever in our hearts, more for its beautiful people but Rome, you are truly beautiful! Ciao Bella, we will return. ‘Arrivederci’ for now!

Let there be light
Comments are closed.