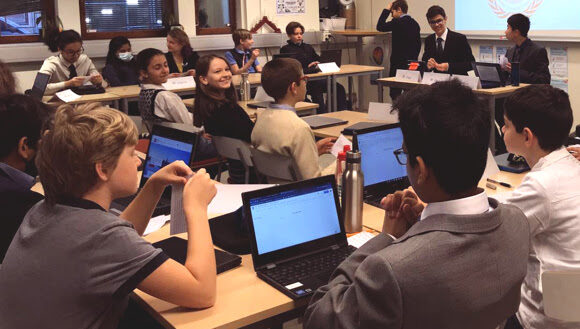 After a difficult year due to the pandemic, the ModelUN programme was back in action in January. As well as preparing themselves to represent various countries, the students also organised a media team to provide real time coverage during the sessions across all three school sites. So we thought it would be fun to turn the reporting on the event over to them.

How does a full day of debating important issues with your classmates sound? SISMUN 2022 took place on Friday, January 28, marking the revival of SIS’s annual tradition for grades 6-11, put on hold last year due to the pandemic. Back in full swing, students prepared for weeks in advance for the day-long event of debates. Committees consisted of 10-15 students from the same grade, chaired by two older students who organised and monitored the discussions.

Major changes were present in the event this year, as seen from interviews with various MUN members including chairing students and SISMUN director Ms. Khan.

How exactly is SISMUN being modified? “This year, we don’t have any guests. In the past, we’ve always had schools coming from countries like Denmark and Germany. We have smaller committees because of COVID. We will not have a closing ceremony, we’ve had to cancel that, so we won’t have a speaker. So I think things are “watered-down,” and on a much smaller scale because of the regulations that came in December,” says Ms. Khan.

The chairs spent a lot of time making sure they knew what they were doing, practising different topics and situations. One student gives us a description of the process, “It’s mainly a simulation: we all go to a classroom with one person chairing and the others pretending to be candidates. We then basically follow a normal committee meeting.” It wasn’t just the chairs working hard, Ms. Khan also dedicated a good deal of time making sure everyone knew their part, “She made sure that we had a good understanding of everything and she made us guides and shared helpful documents with us.¨

The impact of the chair training was clear during the event, where chairs knew exactly how to handle different situations and types of students. In more hesitant discussions, the chairs prompted delegates to share their thoughts while keeping the more chaotic debates under control. They used humor to make participants feel comfortable, and helped them when needed, leading to better engagement.

As usual, nerves were all around in the morning as delegates rushed to find their committees and chairing students were shuffled around due to absent delegates. Nonetheless, the team worked smoothly with the chairs being flexible and accommodating to any changes that came their way. Committee sizes varied drastically this year, with some up to 20 delegates and others a mere six.

The chairs also mentioned that a larger number of delegates might have helped in having more opinions on the floor, however, while they lacked in number, both the chairs and the delegates were able to make up for it with their determination and investment.

The issues discussed in each committee were adapted based on the grade, from topics such as “banning homework” and “banning chocolate ice cream” for the 6th grade to ageing populations, financial flows to Africa, and the situation in Afghanistan for the older grades. The younger ones had fun with the topic and many were eager to interact, while the older students drove fruitful discussions on global issues and created meaningful resolutions for solving these problems.

As the day progressed, it was clear that many delegates started feeling more comfortable and open to engaging in the debates.

“It was confusing at first, but as we kept going I got a better idea of what to do,” explained another student. “The discussions were interesting and I learned a lot of new things.”

Meanwhile, the 11th grade students spent the day over in the OPG building crafting “zines” in groups, for which they researched and planned during Advisory lessons over the weeks prior. “It’s basically self-publishing, a zine is just short for a magazine. And you can create it on whatever you want; it’s as creative as you want it to be,” says Ms. Khan.

To round off the day, the chairs were given the responsibility of choosing two outstanding delegates from their committee to win an award. These awards are based on participation, deep thinking skills, commitment, valuable contributions, focus, and engagement. Delegates were issued certificates to commemorate their performance. Distribution of the awards was met with enthusiastic applause, to say the least.

For many of the young delegates this was their first time participating in such a big event. They should all be proud of what they achieved. Many chairs had a hard time choosing the best delegate as many were very involved and enthusiastic. Even if this year COVID prevented mixed classes and delegates from other schools attending, most people believe it was a great success.

Great work to the delegates for their preparation and involvement in the discussions throughout the day. A special thanks to Ms. Khan and the chairs for their efforts in running the event smoothly. Another year of SISMUN is complete!

This text was assembled by Shanmathi Jaganbabu, a Grade 11 – QQ reporter, using extracts from articles on the Quirky Quibbler. You can read the full articles and more at https://thequirkyquibbler.com/category/school/mun/.

At the service of Stockholm

A programme with lots of pluses
Comments are closed.