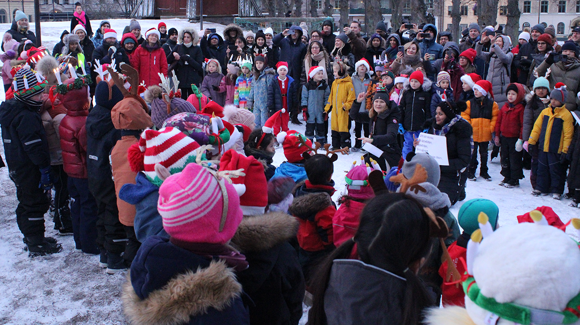 Let there be light

It was a particularly cold morning this year as the sun rose on another Lucia day celebration. Seemingly as Swedish as knäckebröd and julbocken, Lucia is actually recognised in many countries, including Italy in particular. But in Scandinavia at this time of year, light has so much significance, the Lucia celebration is particularly special.

The modern day celebration is an amalgam of religious and folk traditions. The date of Lucia – December 13 – originally marked the longest night of the year or winter solstice, but when the Gregorian Calendar was adopted in the 18th century the date of the solstice changed, but Lucia continued to be celebrated on the 13th.

Today, light and song are synonymous with Lucia, and so it was that our well-wrapped classes assembled in front of the School to sing traditional songs in Swedish and English, that warmed the hearts of their admiring audience. Lighted crowns were in abundance, and matched only by the sprouting of reindeer antlers.

And after the celebrations in the park, our Lucia choir visited the residents of nearby Drottninghuset, to entertain them with songs and enjoy traditional lussebullar in their company.